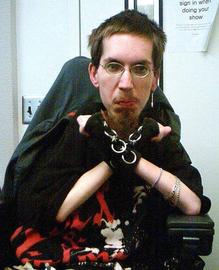 Turbo is the co-founder of Rock Against Dystrophy,he has been a long time fixture since 1984 on the  New York City segments of the Jerry Lewis Mda Labor Day Telethon.Turbo as he is known in the metal world is also the co-founder of Bullspike Radio where he also host rock and metal show called The Asylum..

Turbo supports  rock and metal and also does reviews,promoting shows and albums and creates promotional fliers for bands and concerts.

Rock Against Dystrophy was founded in 2009 by brothers Turbo and Jay Scorpion. Both have spinal muscle atrophy,one of the 40 neuromuscular diseases  the Muscular Dystrophy Association addresses with their research and patient services.

The fan,musicians and club owners who make up the metal and rock community have a passion for life and fun thats just as hard core as their passion for music.One of their biggest wishes is that all people affected with neuromuscular disease get to live a life that is filled with fun and the ability to enjoy it all for a long time.Rock Against Dystrophy unites these passion and wishes into actions.

all proceed generated by Rock Against Dystrophy's events go to support the research projects,patient services and education programs of the Muscular Dystrophy Association..

About Rock Against Dystrophy 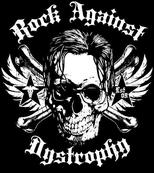 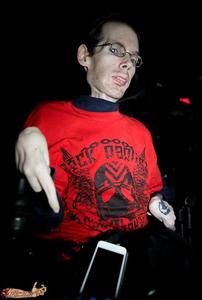 Jay has appeared since the mid 80s on the New York City portion on The Jerry Lewis MDA Labor Day Telethon to help deliver the message about the importance of the work that the MDA performs and the medical discoveries the researchers are finding.After three years of extra-serious health challenges . jay made a triumphant return to the telethon in 2010,surprising host and clos friend Tony Orlando